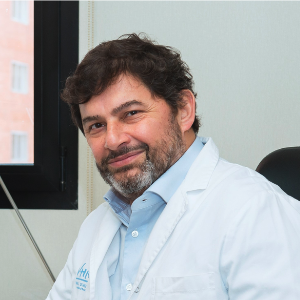 Professor Bosch graduated from Medical School in the University of Barcelona 1988. In 1997 he was awarded a PhD by the University of Barcelona for his research about the over-expression of Cyclin D1 in chronic lymphoproliferative disorders under the supervision of Professor Elias Campo.He subsequently did a two-year postdoctoral stay in the laboratory of Professor Riccardo Dalla-Favera at the Institute of Cancer Genetics, Columbia University, New York. He moved back to Hospital Clinic in Barcelona in 2000 where he continued doing research in CLL.

Since 2004, prof. Bosch is the Head of Hematology of Instituto Oncologico Baselga. In September 2009, Prof Bosch became Head of the Department of Hematology and Director of the Experimental Hematology laboratory at the University Hospital Vall d’Hebron in Barcelona.

Professor Bosch is one of the most internationally reputed leaders in Chronic Lymphocytic Leukemia (CLL). He conducts both clinical and basic research in CLL and other lymphoproliferative disorders, particularly focusing in the molecular pathogenesis of CLL and in the development of novel therapeutic approaches. Since 1995 he has been involved in the development of clinical trials in CLL, performing several contributions in the prognosis assessment and treatment of CLL.

Since 1995 he has been involved in the development of clinical trials in CLL, performing several contributions in the prognosis assessment and treatment of CLL.

Professor Bosch is currently chairing the Spanish CLL Working Group (GELLC), responsible for the development of Spanish CLL Clinical trials. He has published more than a hundred papers in peer-reviewed journals including high-impact ones such as The New England Journal of Medicine, Nature Medicine, Cancer Cell, Blood, Journal of Clinical Oncology, and Leukemia. In addition, he has authored or co-authored several Reviews and Book Chapters on the subject of CLL and other lymphoproliferative disorders.

Professor Bosch is nowadays working in more than 80 projects from phase 1 to phase 3. This means that in the coming years new drugs and new indications for current drugs will be available thanks to Professor Bosch research.